Since releasing the 2005 version of ShipConstructor, the AutoCAD-based 3D product modeling software-of-choice for shipyards and designers, Albacore Research Ltd.

Since releasing the 2005 version of ShipConstructor, the AutoCAD-based 3D product modeling software-of-choice for shipyards and designers, Albacore Research Ltd. (ARL) has been working closely together with customers worldwide to introduce even more time- and cost-saving features. In close collaboration with Japanese and Australian shipbuilders, two new features, Accuracy Control Marks and Automatic Straking, among others, will raise the bar of what can be done with a CAD system.

Small inaccuracies easily add up to significant deviations during multiple steps of assembly. Precise fabrication is a means of reducing rework, delays, and waste – and who is better known to focus on Continuous Improvement than the Japanese. In Japan, Accuracy Control Marks are used for two tasks: aligning stiffeners with high accuracy on plates as well as the accurate joining of plates for welding. This feature is now available worldwide through the latest update of ShipConstructor2005. For aligning stiffeners, a mark is made on the plate and on the stiffener so they can be easily aligned during assembly. ShipConstructor scribes accuracy control marks onto plates during NC-cutting. For stiffeners, ShipConstructor automatically generates stiffener plots with dimensioned locations of the accuracy control marks, or the data can be fed directly to an automated stiffener cutting system. 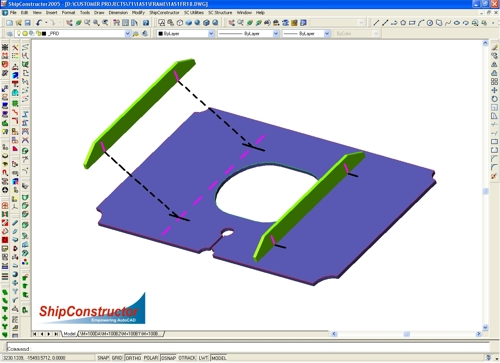 For joining plates, a line is made on each of two plates to be welded together such that the line runs parallel to the plate’s edge and is offset a certain distance from the edge. Before welding, yard workers measure the distance between these lines at various points to ensure perfect alignment. Without these lines it can be difficult to maintain the correct spacing between plates, especially for plates with bevelled edges and weld gaps. As usual, ShipConstructor’s product model database automatically provides a list of shipyard standards based on plate thickness and weld type to ensure that the project standard is followed by all designers. These standards, loaded into the project database by production managers, are an effective way of transferring knowledge to less-experienced users. 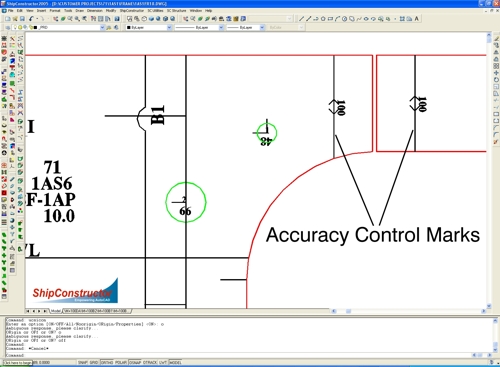 Previously, Japanese shipyards created the accuracy control marks manually within AutoCAD, a time-consuming process. Now, they can easily create these marks in a few seconds. Not only does this feature accelerate Japanese customers’ existing workflow, it also makes these Japanese best practices available to ShipConstructor customers worldwide.

Mr. Fumiyoshi Kato, President of Yakushiji Industry Ltd., said “ARL’s efforts to develop features based on Japanese shipbuilding practices is making ShipConstructor increasingly attractive to Japanese shipyards. At the same time, proprietary shipbuilding software that has been used in Japan for many years is becoming more and more difficult to maintain. It is therefore especially important for Japanese second-tier shipyards to have an alternative like ShipConstructor that is continually being improved in close collaboration with Japanese customers.” Mr. Kato worked closely with Japanese shipyards and ARL to ensure that customer needs and ShipConstructor feature development were perfectly aligned.

ShipConstructor users in Australia, who rely heavily on aluminium construction, have brought forward the issue of ‘Automatic Straking’. Automatic straking is used for automatically dividing predefined areas, such as decks and bulkheads, into planks based on the parameters of available stock, then generating a BOM automatically. Previously, straking had to be done manually, so an automatic method of straking represents a significant saving of time. Automatic straking also works with state-of-the-art prefabricated aluminium extrusions and sandwich panels, which are increasingly being used outside of Australia as well. 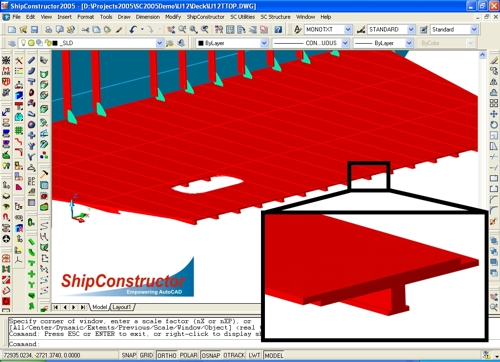 Figure 3: With Automatic Straking of a predefined area within the ship, ShipConstructor provides another great time saving tool.

ShipConstructor’s features will be demonstrated at the Offshore Technology Conference in Houston in May as well as other shows worldwide.

The SSI Marketing team works to share the stories that make SSI and the business of shipbuilding possible. Based in Victoria, BC, the team constantly has their ear to the ground of the latest industry and SSI news.